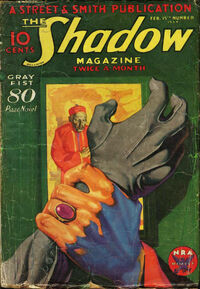 The justice of Yat Soon is legend in New York's Chinatown. His name is law among the tongs, those strange secret societies that exist among the Chinese. Rival leaders seek him when they need a third party to resolve their differences. There's a saying: "When Yat Soon speaks, all must do his bidding."[1] Such is the power that this wise Celestial has. And, being a just man, he's on good terms with The Shadow.

His other trusted friend is Dr. Roy Tam, a well respected American-Chinese physician who is known as the Chinatown arbiter in San Francisco.