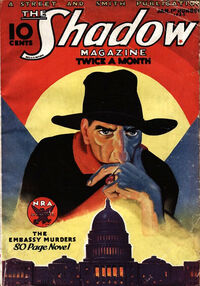 Washington, D.C. is the capital of the United States. It is the center of the Federal government, it's branches and bureaucracies, and all foreign embassies are located there.

It is also one of the many places that The Shadow travels to when fighting his war on crime. Well, not street crime, but confronting spies and national affairs. Aided by friends, such as F.B.I. Agent, Vic Marquette, The Shadow has performed several heroic deeds which aided America, as well as, world stability.

Residents of Washington, D.C. include: