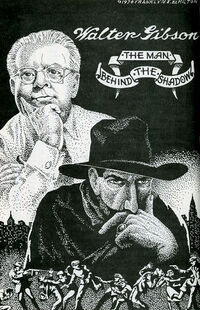 Walter B. Gibson was a pulp magazine writer, who is best known as the creator of The Shadow, or at least the "pulp" version. He wrote 282 novels featuring the character. Many of them have been adapted for various comic books and film adaptations.

Gibson was also a magician, among other talents, and created the lesser-known character, "Norgil the Magician." Norgil was published in another Street & Smith pulp title, but made a comic book appearance in Shadow Comics #3.

In 1952, he edited a short-lived science fiction magazine, Fantastic Science Fiction. A few of his sci-fi stories were published in the magazine as well.

Though he was never really employed as a comic book writer, outside of adapting The Shadow pulp stories for Shadow Comics, his last completed work was for DC Comics, "The Batman Encounters - Gray Face." It was published in 1981, and can be read in Detective Comics #500.

Images Attributed to Walter B. Gibson