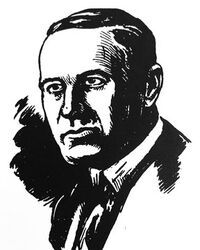 Vic Marquette has worked for the F.B.I., as well as several other Secret Service Agencies. He's generally described as a "government man," "government agent," "G-man," "Federal Man" or just "a Fed." On two occasions, he was working for the Treasury Department.

He and The Shadow are allies. They often work together busting up spy-rings and confronting counterfeiters. Coincidentally, when The Shadow was working on a case in San Francisco's Chinatown,[1] he came in contact with one of Marquette's uncover agents, Myra Reldon, while she was disguised as "Ming Dawn." The Shadow was so impressed with her talents, that he brought her into the fold of his agents when Marquette ended Reldon's contract with the Justice Department.

Of all the Shadow agents, Marquette's main contact, and trusted friend, is Harry Vincent. He has also met, and worked alongside New York City's Inspector Joe Cardona.