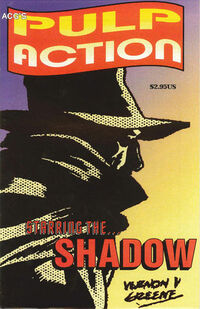 Vernon Greene was a prolific cartoonist who's best known for his artwork on the King Features strip, Bringing Up Father. He illustrated for several Street & Smith pulps, including The Shadow, The Masked Lady and Perry Mason. In June 17, 1940, Greene began drawing The Shadow daily comic strip, which was the character's first appearance in comics. The daily was distributed by the Ledger Syndicate. Greene continued to draw the Shadow daily until June 13, 1942 when it was canceled due to the paper shortages and the growing amount of space required for war news during World War II.

Fortunately, Shadow Comics started in 1940 and in 1941 it featured a compilation of some of the newspaper strips Greene illustrated, with Walter B. Gibson adapting his stories from Shadow Magazine.