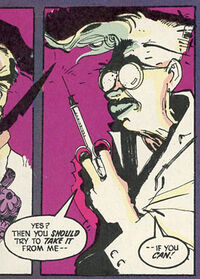 Twitchkowitz was once a pro-wrestling trainer who slipped his athletes adrenaline injections to swing matches in his favor. It was agent Perez who introduced The Shadow to Twitchkowitz, who was then inducted into the ranks as a narcotics expert.

After The Shadow's apparent death by poison gas,[1] Twitchkowitz briefly carried on his Master's work by disguising himself as the green-clad crime fighter, The Inoculator, a new hero who injected his victims with lethal doses of prescription drugs, delivered from an over-sized syringe.