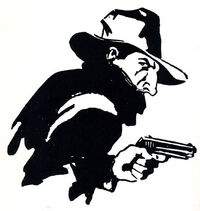 Tom Lovell was an illustrator of pulp magazines who painted several covers for detective and western titles. He also drew pen and ink interior illustrations for various pulps, including an extensive run for The Shadow Magazine.

Lovell was the first regular interior artist for the magazine until October 1, 1937. Edd Cartier took over after Lovell, however, they did share art duties on a few issues from mid-1936 through late 1937.