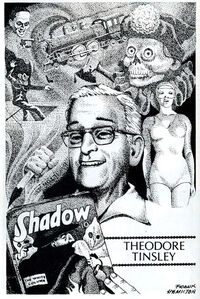 Theodore Tinsley was primarily a pulp writer. He is best remembered for penning 27 of The Shadow stories. During his stint at Street & Smith, he wrote four Shadow novels a year for the next six years, his first being "Partners of Peril." Some have speculated that this story influenced the plot for the first Batman comic book story.[1] Tinsley's second Shadow novel, Fox Hound, was the basis of the 1938 film International Crime. His last Shadow story was published in 1943.

Tinsley also created one of the first female detectives in pulp fiction, Carrie Cashin, who appeared in Street & Smith's "Crime Busters" and its successor "Mystery" from 1937-1943. Another creation of his, Detective Terry "Bulldog" Black, appeared in Street & Smith's "Nick Carter Detective Magazine," "The Whisperer" and "Crime Busters" from 1936 to 1938.