The Shadow Wiki
Register
Don't have an account?
Sign In
Advertisement
in: Publications, 2014, July, Modern-Age,
and 10 more

The Shadow Over Innsmouth

"The Shadow Over Innsmouth" 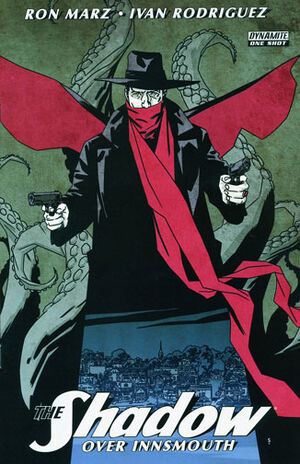 Appearing in "The Shadow Over Innsmouth"

Synopsis for "The Shadow Over Innsmouth"

When Lamont Cranston and Margo Lane find themselves stranded in Innsmouth, a fog-shrouded town which holds deep secrets, terrible truths begin to surface.

One night, Margo walks to the wharf and is pursued by undersea creatures who attack her and knock her out. She is rescued by a local resident, Zadok Allen. He takes her to Innsmouth Inn so she can recuperate.

At the Inn, Zadok tells Margo and Lamont a tale about the local legends of Innsmouth and the seafaring inhabitants. He explains how generations before had voyaged to the South Seas, finding a cult that practiced human sacrifice to placate immortal undersea creatures. The fish-men made a pact with the sailors, who brought them back to Innsmouth to dwell on an offshore reef and be worshiped; in exchange the undersea creatures provided gold.

Cranston finds the story ridiculous and he and Margo plan a ruse so The Shadow can investigate the truth of the matter.

That night, The Shadow visits the wharf area and encounters the hybrid-marine creatures who are carrying bags of loot. A gun battle follows and several fish-men escape back into the sea. The Shadow knows.

The next morning, Lamont and Margo stage a conflict by arguing in public and Cranston driving off in a cab in haste.

Again, Zadok comes to Margo's aid and warns her to stay inside the Inn and be safe from tonight's fog.

Instead, she heads to the wharf and witnesses a submarine docking. A fish-man tries to attack her, but she is able to rip the man's mask off. It is Zadok. He grabs Margo and takes her inside a warehouse where several other men in sea creature outfits are waiting. He confesses to being the leader of the bootleggers and then commands a thug to shoot Margo. However, The Shadow leaps out of nowhere, firing away and killing many. The Shadow then lights the place on fire and somehow sinks the submarine rather quickly. Zadock, dies in the wreakage.

A few days later, an author visits the local pub and hears the story of The Shadow in Innsmouth.