The Shadow Wiki
Register
Don't have an account?
Sign In
Advertisement
in: 1940, January, Walter B. Gibson/Writer, The Black Ship/Appearances, Cobalt Club/Appearances

WRAPPED IN MYSTERY! LOADED WITH THRILLS!

The Shadow battles a villain known as The Black Tiger, who has the power to make himself invisible and is trying to take over the world with his death ray. This was Columbia's ninth serial and it was based on the famous radio series and pulp magazine character of the same name. 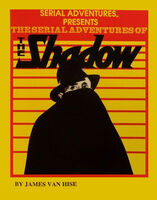 The Serial Adventures of The Shadow