The Shadow Wiki
Register
Don't have an account?
Sign In
Advertisement
in: Publications, 2013, October, Modern-Age,
and 15 more 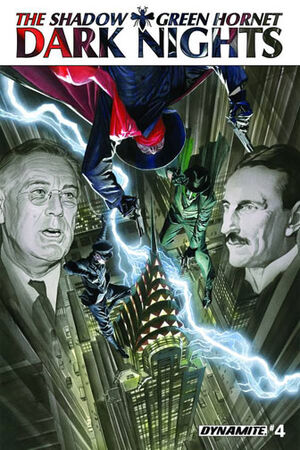 1939: After kidnapping President Roosevelt and having him hidden in the tunnels beneath Park Avenue, Shiwan Khan then seizes scientist Nikola Tesla's Death Ray which can only be powered by the Girasol jewel.

Later, he tries to take out the central power station in Manhattan, but is confronted by The Green Hornet who douses him with his gas gun. With the Death Ray in hand, Khan flees, and heads towards the Chrysler Building tower, hoping to vaporize midtown New York.

Meanwhile, Cliff Marsland heads beneath the streets, into the city's steam tunnels, in order to rescue President Roosevelt.