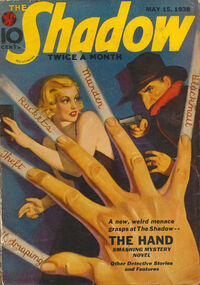 The Hand, were five crooks, five "fingers," who had worked together, then had turned to lone-wolf methods. Masters of many rackets, they had separated to build up their individual organizations. One by one, starting from the little "finger," The Shadow had finished their criminal careers.