The Shadow Wiki
Register
Don't have an account?
Sign In
Advertisement
in: Publications S, The Shadow Titles, Street & Smith Titles,
and 5 more 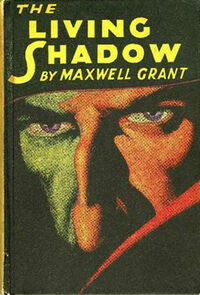 In the early 1930s, the publishing house began promoting its Detective Story Magazine, via a radio program, that dramatized stories from the publication. The program was hosted by the mysterious Shadow.

When readers began clamoring for the magazine featuring "The Shadow," the company quickly hired writer and magician Walter B. Gibson to write about the character, and feature him in print. The Shadow Magazine hit the newsstands in 1931 and lasted for 325 issues.

As part of "The Ideal Library" imprint, Street & Smith reprinted the first three Shadow stories as hardback books. The volumes measure 5 x 7 1/2 inches and were 1 1/2 inches thick. They were issued without dust jackets and the paper was "pulp." They sold for 25 cents throughout the 1930s.