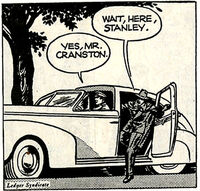 Stanley is Lamont Cranston's chauffeur. He is unaware of his boss being linked to The Shadow. Although not an agent, he has provided aid to The Shadow by driving him to various locations or being a participant in a handful of car chases.