The Shadow Wiki
Register
Don't have an account?
Sign In
Advertisement
in: Characters, Templated Articles, Public Identity,
and 6 more 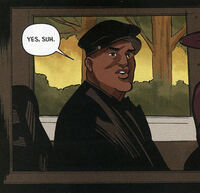 Stanley is Lamont Cranston's chauffeur. He met Kent Allard in WWI, in the trenches. One night Allard pulled Stanley out of a foxhole just as a bomb hit. This action saved his life, and he has been indebted to him since.[1]