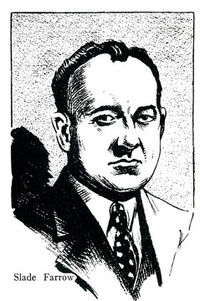 Slade Farrow is a criminologist who takes pride in reforming criminals who want a second chance. Two of those were Hawkeye and Tapper who later became agents of The Shadow.[1]

Farrow has spent many years as a voluntary convict inside the confines of a dozen penitentiaries. He considers this "laboratory work," as his idea of a laboratory is a prison cell. His great purpose is to prove the innocence of men whose punishment was undeserved.

To help further Farrow's cause in reshaping the lives of convicted men, The Shadow established a prison colony on a cluster of tropical isles in the West Indies. The Shadow's old rusted steamship, "The Reciprocity," transports the petty thieves to the island so that they can be rehabilitated by his friend.[2] Though The Shadow owns the rehabilitation center, he rarely visits.

Due to being one of The Shadow's closest friend, Farrow is aware that Kent Allard, the celebrated aviator, is the crime-fighter's true identity.

Equipment: None known.
Transportation: The Reciprocity is an old, rusted steamship. It had found a haven in the "ghost fleet" of the upper Hudson - the graveyard of decaying military ships too good to scrap, but not worth operating. The Shadow bought it and renovated it to help Slade Farrow transport criminals to his "colony."
Weapons: None known.