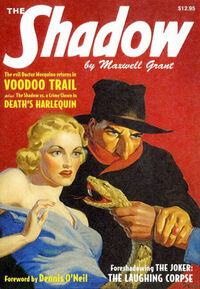 Sidney Slon was a radio scriptwriter who wrote several episodes for "The Shadow" and "The CBS Radio Mystery Theatre" during the 1930s and '40s.

Prior to becoming a writer, he studied acting in the Goodman Theater in Chicago. He then moved to New York City in 1933 to pursue a career as a performer. He encountered some success on radio and assumed various character roles on "Famous Jury Trials," "The Life of Mary Sothern" and playing Solly in the comedy "The Goldbergs."

In 1938, he became the writer of The Shadow Radio Show starring Orson Welles. Though credited for bringing the character "Shrevie" into the show, his most influential episode is perhaps The Laughing Corpse. Slon's script introduced the listeners to a mad chemist who injected his victims with a poison that induces laughter before death. Batman's villain The Joker is believed to be inspired by this episode. It should be noted that The Joker made his comic book debut in the spring of 1940, only a few months after the show aired.

Slon's scripts for The Shadow were well written, gritty, short stories which were filled with "pulp" elements. Many of them were about death house inmates seeking revenge or cold blooded killers somehow returning from the grave. All of them concluding with a reasonable, but ghastly, explanation to how the crimes were committed.

After leaving radio in the 1950s, Slon produced and wrote for some of the earliest television series, including "Big Town" and "Sergeant Preston of the Yukon." He also wrote, "Invitation to Paris," a musical tour of the city with actor Maurice Chevalier, which aired on ABC-TV in April of 1960.

In the 1960s, he left the entertainment business and went to work for a family enterprise.