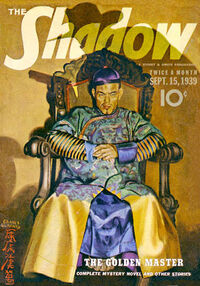 Shiwan Khan was a would-be world conquer and archenemy of The Shadow. He was the last living descendant of Genghis Khan.

As a youth, he traveled to Lhasa, Tibet and studied with the monks. After learning their mystic ways, he used his knowledge to help the people of Mongolia, but he began to feel a lust for power and later tried to rule the world as a new Khan.

He operated from the lost underground city of Xanadu, beneath the Sinkiang. He had access to the treasures of Kublai Khan and was trained by the Tibetan monks to use telepathic powers. He could also appear invisible to most people by staying completely still and suspending his "action of thought."

During his world-wide conquest, he had sought planes and munitions, and also acquired important inventions which were useful in warfare, but The Shadow defeated him. Later, Khan used his telepathic powers by influencing highly intelligent people to return with him to Xanadu. He hoped to form the genesis of a future race of exceptional masterminds.

His last attempt of conquering the world led him to New York City. While there he gathered numerous mob lieutenants from the underworld, thus causing an unprecedented crime wave. However, his plans ended in utter defeat and a gristly and horrible death had befallen on him at the hands of The Shadow.