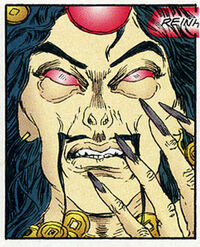 Shiwan Khan was a would-be world conquer and archenemy of The Shadow.

He traveled to America in Genghis Khan's sarcophagus, absorbing his ancestor's ancient power. He hoped to take over the world, staring with the destruction of New York. But first he hypnotized Margo Lane, armed her with a pistol and sent her after The Shadow. He then kidnapped Lane's scientist father, Reinhardt Lane, who was designing a metal sphere to submerge in water. When The Shadow learned that Khan was filling the chemical Bronzium into Lane's beryllium sphere, thus creating a bomb, he thwarted Khan's schemes of conquest by having the homemade bomb destroy Khan's source of power -- the ancient sarcophagus.

After successfully saving the world, The Shadow had Khan institutionalized at Dr. Roy Tam's medical facility, where he underwent an operation which removed his frontal lobe -- relieving him of his telepathic powers.