The Shadow Wiki
Register
Don't have an account?
Sign In
Advertisement
in: Publications, 1990, March, Modern-Age,
and 15 more 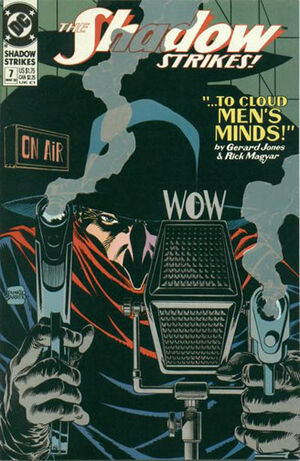 With proper force... and subtlety... people can be made to believe anything... short, perhaps, of an invasion from Mars.

Appearing in "To Cloud Men's Minds"

Synopsis for "To Cloud Men's Minds"

When Grover Mills, a young theatrical genius, starts producing a radio show about The Shadow, The Shadow pays him a visit to stop it. When he confronts the producer at the theater, he discovers two thugs robbing the box office. The thugs grab one of the stage actress as a hostage, and make a run for it. The Shadow and producer give chase, racing through the streets and ending up at Coney Island. A shootout occurs in the hall of mirrors, and the two are able to rescue the actress. Later, The Shadow agrees that perhaps Mills should continue his show, as there is a need for a radio program which can spread terror to the underworld.


Appearing in "Voices from the Shadows"

Synopsis for "Voices from the Shadows"

Text article about The Shadow radio programs from the past.