The Shadow Wiki
Register
Don't have an account?
Sign In
Advertisement
in: Publications, 1991, February, Modern-Age,
and 14 more

"Who Is Number One?" 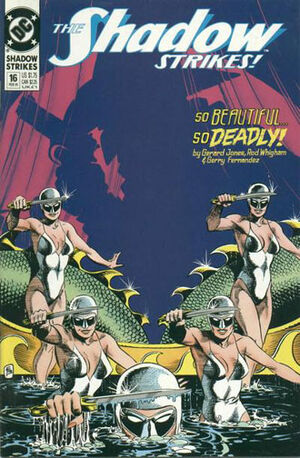 Appearing in "Who Is Number One?"

Synopsis for "Who Is Number One?"

December 1935: While attending an aqua-themed nightclub, Commissioner Weston and "Cranston" witness the drowning of an Olympic diver. Soon after, Inspector Cardona is called in to investigate. Much later, The Shadow questions a financier of the club and learns of a blackmailing scheme being orchestrated by someone called "Number One." At midnight, The Shadow follows the financier to a secret location. Once inside the building, The Shadow is ambushed by several women in bathing suits who are brandishing daggers. During the assault, a harlequin costumed foe appears and fires a gun. A brief confrontation leaves the financier, who The Shadow was following earlier, dead while the deadly clown disappears during the conflict.

The next day, the real Lamont Cranston reads an invitation to a special ceremony. Unknown to him, it's a set-up. He goes to the meeting place, where a harlequin answers the door and promptly shoots Cranston. Bloodied, Cranston stumbles to the street and Shrevnitz's cab pulls up to whisk him to the hospital.