The Shadow Wiki
Register
Don't have an account?
Sign In
Advertisement
in: Publications, 1935, December, Golden-Age,
and 15 more 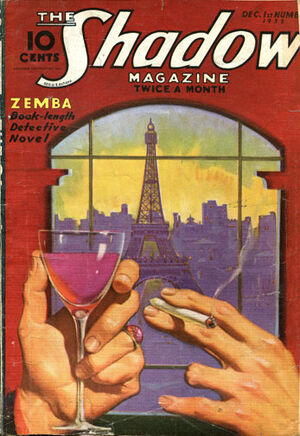 Gaspard Zempa is a criminal mastermind who has stolen submarine parts and war plans from Italy, Spain and England. While seeking seclusion in Paris, he holds these vital parts and information as hostage for a total of five million dollars.

By using multiple disguises, Zemba has also killed several men, including a train guard and eluded the police. The only way to identify Zemba is by his missing ring finger on his left hand (see cover), which is often gloved.

For the last five days, The Shadow, Elite Detective Etienne Robeq, Harry Vincent and Cliff Marsland have attempted to hunt down the criminal before he sells his stolen documents to the highest bidder.

Finally, The Shadow and his agents find themselves in the secret hiding spot of Zemba. It is here that the most confusing and intricate twist is revealed, detective Robeq was disguising himself as The Shadow in order to have the aid of Cliff and Harry while Zemba was disguised as Detective Robeq in order to get police information and place his moles in the department. However, there is more. The Shadow had also been pretending to be Zemba in order to use the crook's gang to reveal the secret hiding spot of the government documents. During the final confrontation, Zemba is killed by one of his own men, Jaques, who thought Zemba was really Robeq.