The Shadow Wiki
Register
Don't have an account?
Sign In
Advertisement
in: Publications, 1935, November, Golden-Age,
and 15 more 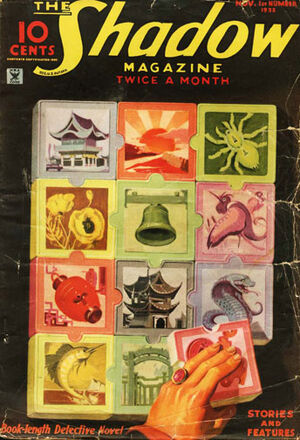 Here, in San Francisco, I have encountered one of the strangest cases that I have ever seen in all my career as a physician. That is why I telegraphed Yat Soon, asking that he communicate with you at once. I urged that you should come here, to take my place, my hope being that you could gain the answer which I have failed to obtain. I came to San Francisco to continue the work that I had begun when we first met: namely, to aid fellow Chinese in their efforts to adopt American ways and methods, to throw off superstition and achieve progress. In this work, I discovered that my fame as a physician was valuable. I was recognized because of my medical knowledge. As a consultant, I was welcomed in many quarters where ordinarily a man of my advanced views might not have been received. It was in the capacity of physician that I visited the home of Ku Luan. A dead man who lives.

Appearing in "The Chinese Tapestry"

Synopsis for "The Chinese Tapestry"

From the depths of blackness steps The Shadow, to aid a white heir to a Chinese fortune to solve the mystery of the Chinese Tapestry.