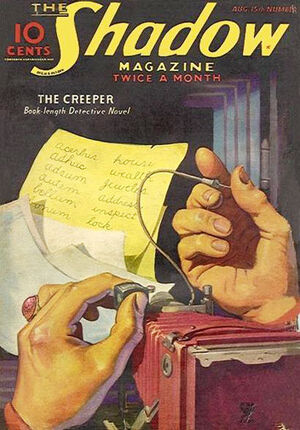 He's no gorilla, that fellow. If he had been, he'd have quit. This was his first try at murder. It's the new ones who are the toughest sometimes. They're after blood; they don't calculate. Too bad I had to shoot him; I wouldn't have had a chance, if I hadn't.

Appearing in "The Creeper"

Synopsis for "The Creeper"

Retrieved from "https://thelivingshadow.fandom.com/wiki/Shadow_Magazine_Vol_1_84?oldid=14311"
Community content is available under CC-BY-SA unless otherwise noted.