The Shadow Wiki
Register
Don't have an account?
Sign In
Advertisement
in: Publications, 1934, November, Golden-Age,
and 29 more 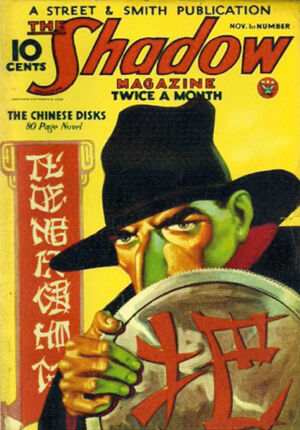 Say, that guy gave me the creeps. But he's an ace. If he wasn't, Moe Shrevnitz wouldn't be drivin' no cab today. Tell me what he wants. I'm game for it.

Appearing in "The Chinese Disks"

Synopsis for "The Chinese Disks"

Years after his first defeat by The Shadow, Diamond Bert Farwell gets out of jail on good behavior. He then institutes a system of Chinese disks to identify his agents and steal and sell large quantities of jewels. He also uses various disguises to evade the police.

The Shadow also uses a variety of agents, some for the first time to bust the crime ring.

At the end of the story, The Shadow sees through Bert's final disguise and is shot by our hero never to rise again.