The Shadow Wiki
Register
Don't have an account?
Sign In
Advertisement
in: Publications, 1934, May, Golden-Age,
and 22 more 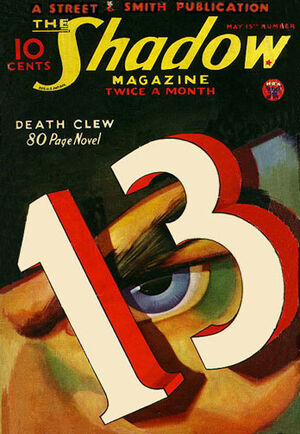 One armed killer Strangler Hunn is on the scene working for unknown forces. Despite missing his right arm he is still a capable assassin. Working for a hidden boss he discovers Detective MacAvoy Crane has key info that Hunns employer is looking for. During a break in Hunn writes down info to pass along to his boss and eliminates the detective.When the police arrive he burns what he had written down and in the ensuing fire fight is killed by The Shadow. Detective Cardono finds a burnt piece of paper with the remains of what Hunn was writing. MEN 13. Cardona conceals this ambiguous clue. Without the knowledge of this key evidence The Shadow faces an uphill battles as he attempts to uncover the mystery of the Death Clew.