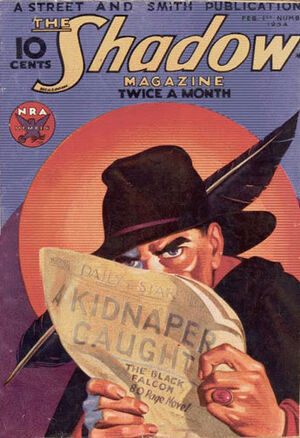 I talked to you as if I were Lamont Cranston. I paved the way for you to plan an abduction. I am not Lamont Cranston; but his features are ones that I have often adopted. The real Cranston had returned to his home; summoned by supposed business telegrams that I arranged. For when I play his part, even his friends and servants are deceived!

Appearing in "The Black Falcon"

Synopsis for "The Black Falcon"

Retrieved from "https://thelivingshadow.fandom.com/wiki/Shadow_Magazine_Vol_1_47?oldid=9175"
Community content is available under CC-BY-SA unless otherwise noted.