The Shadow Wiki
Register
Don't have an account?
Sign In
Advertisement
in: Publications, 1948, August, Golden-Age,
and 19 more 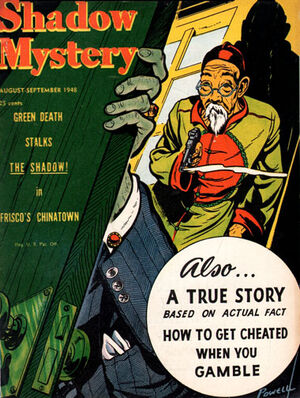 Crime began with the Jade Dragon, which Prince Tsai Hsun brought to America long ago. When an importer's assistant purchased the jewel in San Francisco's Chinatown, death occurred to the shop owner shortly afterward by an assassin's hand. And now the assistant's life was in danger too.

The Shadow becomes involved with the case and with the help of G-Man Vic Marquette, the two uncover a jade smuggling racket.