The Shadow Wiki
Register
Don't have an account?
Sign In
Advertisement
in: Publications, 1948, March, Golden-Age,
and 12 more 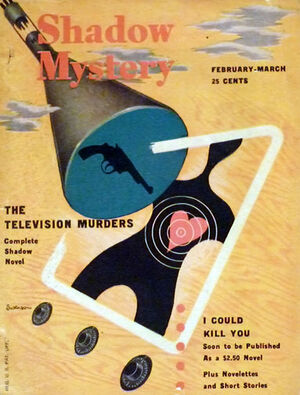 Appearing in "The Television Murders"

Synopsis for "The Television Murders"

A television mystery that comes true... thousands of people actually see a man being shot (but with the wrong bullet!) as a sinister plot is woven into a television drama... a plot that wasn't in the script. Then there was a second murder - also daring. In the subway - at rush hour - in full view of the crowds. Here was a killer who liked publicity... and here was a case for none other than... Lamont Cranston!