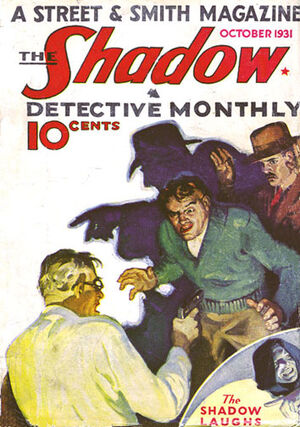 Some people call me The Shadow. That is but one identity. I have other personalities that I assume, as easily as I don my black cloak and hat. One of my personalities is that of Lamont Cranston. In the past, I have used it while you were away. At present, I choose to use it now. It would be embarrassing for both of us to be here. So you must go.

Appearing in "The Shadow Laughs!"

Synopsis for "The Shadow Laughs!"

Retrieved from "https://thelivingshadow.fandom.com/wiki/Shadow_Magazine_Vol_1_3?oldid=15618"
Community content is available under CC-BY-SA unless otherwise noted.