The Shadow Wiki
Register
Don't have an account?
Sign In
Advertisement
in: Publications, 1943, January, Golden-Age,
and 19 more 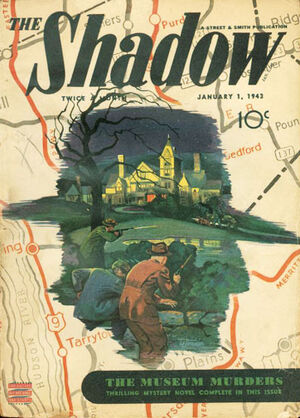 Appearing in "The Museum Murders"

Synopsis for "The Museum Murders"

The Shadow's business was to crack down on crime. By knowing the moves of the law, by studying in advance the target against which criminals might shoot, The Shadow, along with cleaning up crime, did marvels in preventing evil. And if ever crime could wish an opportunity, it had come -- in the priceless possessions of the Argyle Museum. Could The Shadow anticipate what was to follow?