The Shadow Wiki
Register
Don't have an account?
Sign In
Advertisement
in: Publications, 1942, November, Golden-Age,
and 18 more 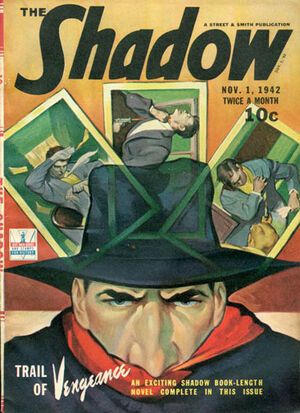 Appearing in "Trail of Vengeance"

Synopsis for "Trail of Vengeance"

Five false friends had brought ruin and death to old Lionel Glendon -- and his nephew Bert sworn vengeance. However, worthy it might be, such a scheme of retribution could bring crime in its wake, perhaps with disaster to the very man who engineered it. Curing evil with evil was a course that sometimes turned sincere men into fiends -- and brought the master of darkness, The Shadow, to their rescue.