The Shadow Wiki
Register
Don't have an account?
Sign In
Advertisement
in: Publications, 1942, September, Golden-Age,
and 13 more 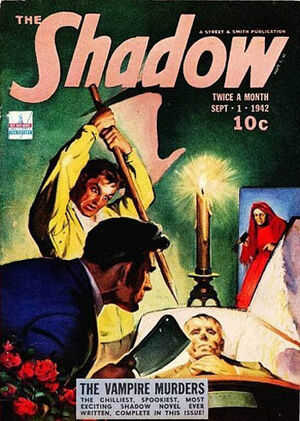 Tonight the vampire may walk again, unless we prefer to think that the skeleton parades these premises. Whichever the case, we shall learn the facts - of murder!

Appearing in "The Vampire Murders"

Synopsis for "The Vampire Murders"

A dying sigh of wind circled Haldrew Hall, forbidding mansion of death, and echoed a whisper that gave a mirthfully, sibilant laugh. Could The Shadow keep his promise that he, strange master of darkness, would take a hand in solving the weird riddle of Haldrew Hall, after mere humans had finished their speculations on the subject of a roving vampire that had vanished without a rattle of its bones?