The Shadow Wiki
Register
Don't have an account?
Sign In
Advertisement
in: Publications, 1942, May, Golden-Age,
and 14 more 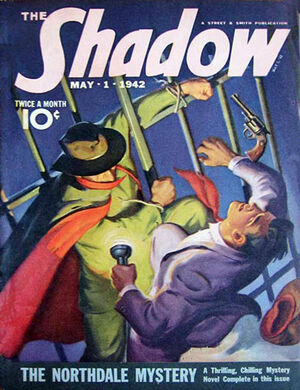 Appearing in "The Northdale Mystery"

Synopsis for "The Northdale Mystery"

The Shadow was thinking of new crime: of mystery much deeper than the recent bank robbery. New crime had followed the bank case. Murder -- coming so close upon The Shadow's triumph over criminals, had convinced the Master of Darkness that there were more things amiss in Northdale than even he, The Shadow, had expected to encounter!