The Shadow Wiki
Register
Don't have an account?
Sign In
Advertisement
in: Publications, 1942, January, Golden-Age,
and 17 more 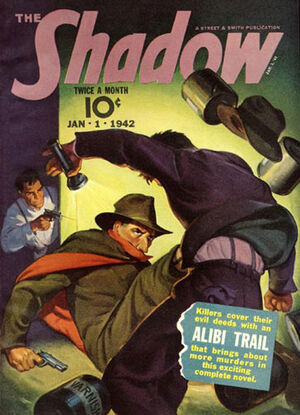 Quiet, inspector. Sorry that I have to use persuasion, but we have no time to waste. I know that you will co-operate. Turn around. Stay right where you are. You won't have to worry about what's going to happen, inspector. You'll find out when the time comes. Be ready.

As the thug's eyes closed in death, The Shadow gave a low, quizzical laugh, as though probing the future. That laugh of the future was a link to the past. Death was on the move! It was on the move more definitely than The Shadow knew. Not until the morrow would he recognize that his trust against himself, as Cranston, was but an interlude in a stronger chain of crime!