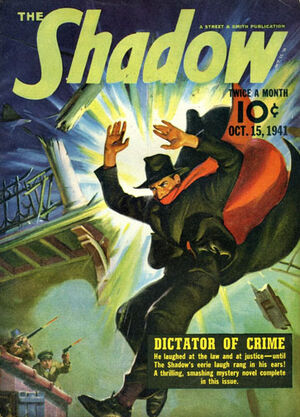 Centralba has only one enemy. His name is Luis Castenago! If you give me my freedom, I shall allow you one privilege, Castenago - that of suicide for the honor of the country that was never yours.

Appearing in "Dictator of Crime"

Synopsis for "Dictator of Crime"

Retrieved from "https://thelivingshadow.fandom.com/wiki/Shadow_Magazine_Vol_1_232?oldid=10794"
Community content is available under CC-BY-SA unless otherwise noted.