The Shadow Wiki
Register
Don't have an account?
Sign In
Advertisement
in: Publications, 1941, September, Golden-Age,
and 20 more 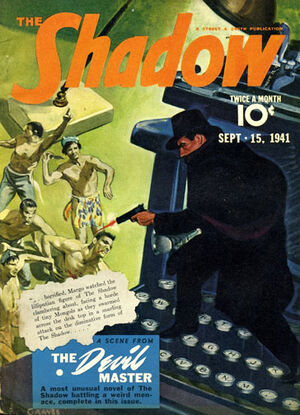 Which is the more powerful? One who burrows deep into the ground, or one who vanishes off into the air? Which is the more dangerous: the beast that growls from its den, or the creature that lurks where it may stalk its prey? Both Su Yeng and Prince Yeddo have similar designs. Each can recuperate, and begin a new campaign. Both will menace you, Tam, because they know you are my friend.

Appearing in "The Devil Master"

Synopsis for "The Devil Master"

By pitting one man of evil against another, can The Shadow bring triumph to the side of the right?