The Shadow Wiki
Register
Don't have an account?
Sign In
Advertisement
in: Publications, 1933, February, Golden-Age,
and 21 more 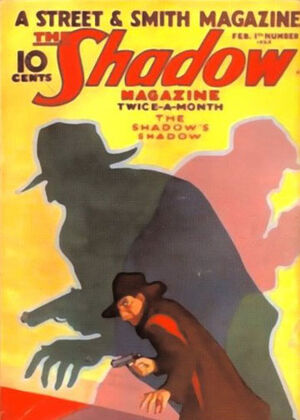 "Burbank speaking. Report from Cliff Marsland. He is established as a member of Gats Hackett's new gang. Job set for to-night. Ready to leave at half past eight. Clyde Burke is following. Will report upon signal from Marsland. Mob outside Archive Building. Attack planned on diamond syndicate office. Half past nine is zero hour."

Appearing in "The Shadow's Shadow"

Synopsis for "The Shadow's Shadow"

An International criminal, Felix Zubian, trails The Shadow. It is revealed that during WWI, Zubian learned of an aviator in the air forces of the United States, one called "The Black Eagle," because of his penchant for flying at night. Zubian believes he has found the aviator who has now taken on a new identity as The Shadow!