The Shadow Wiki
Register
Don't have an account?
Sign In
Advertisement
in: Publications, 1941, September, Golden-Age,
and 18 more 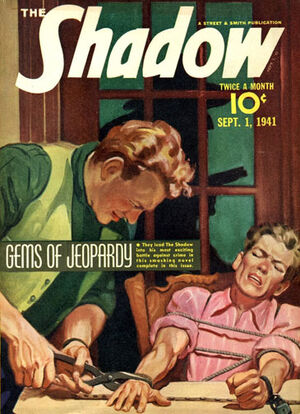 We can't quit now! Dead or alive, we are sworn to carry out the orders of The Shadow. He told us what he wanted. Are you quitting or coming along with me?

Appearing in "Gems of Jeopardy"

Synopsis for "Gems of Jeopardy"

Somewhere along the Atlantic coast, crime was brewing - a ten million dollar crime! - a crime The Shadow had to stop, but couldn't!