The Shadow Wiki
Register
Don't have an account?
Sign In
Advertisement
in: Publications, 1941, August, Golden-Age,
and 19 more

"The Shadow Meets the Mask" 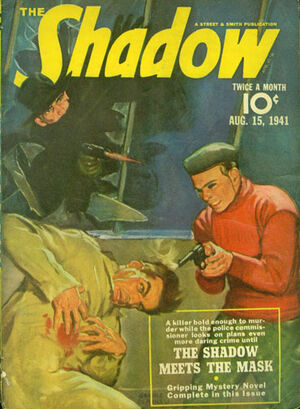 Appearing in "The Shadow Meets the Mask"

Synopsis for "The Shadow Meets the Mask"

Police commissioner and ace inspector, both representatives of the law, were staring at the face of the bold killer who had delivered open death! It's frozen expression, the fact that mouthed words had brought no lip motion, was proof that the face was false. Masked murder had been done in the very presence of the law! If the law was powerless to uncover this frozen-faced fiend, could The Shadow unmasked the Mask?