The Shadow Wiki
Register
Don't have an account?
Sign In
Advertisement
in: Publications, 1941, July, Golden-Age,
and 20 more

"The Star of Delhi" 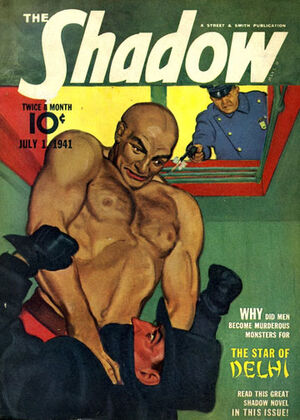 Appearing in "The Star of Delhi"

Synopsis for "The Star of Delhi"

His leer taking on a satanic touch as he gazed at the blue gleam from the great Star of Delhi, Armand Lenfell could relax and reveal himself for what he was -- a man with crime in his heart. For he vowed this costly sapphire should be his -- at any price. Had he seen into the future, Lenfell would have viewed a specter in black whose vow was so strong as his own -- but a vow to down crime. For The Shadow, master over crime, had pierced the secret wondrous Star of Delhi.