The Shadow Wiki
Register
Don't have an account?
Sign In
Advertisement
in: Publications, 1941, February, Golden-Age,
and 18 more 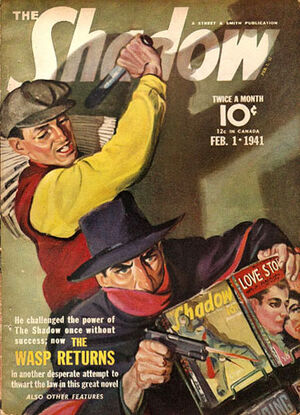 Come, come, Cranston! If you can't become enthusiastic, at least show some appreciation for The Shadow. He is really quite a clever chap!

Appearing in "The Wasp Returns"

Synopsis for "The Wasp Returns"

Louis Dore watched the tiny object flutter to the desk, face gripped in fear. For that tiny token was the wing of a wasp, the symbol of a human wasp whose sting meant death! The Wasp had returned!