The Shadow Wiki
Register
Don't have an account?
Sign In
Advertisement
in: Publications, 1941, January, Golden-Age,
and 18 more 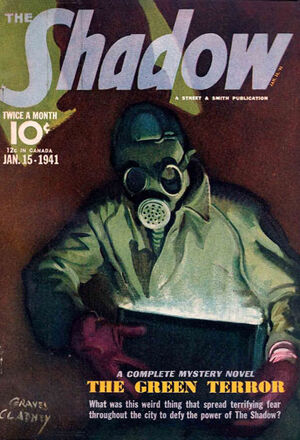 Why did you disobey the rules? You know the rules. Every bank in the city received a copy of them after that first robbery with the fear-ray machine. You were under strict orders not to admit any depositor to the bank who carried a suitcase, a box, or a parcel of any kind larger than six inches square. Why did you break that rule?

Appearing in "The Green Terror"

Synopsis for "The Green Terror"

Four vicious men run an insurance racket -- an insurance of crime! An inventor who is developing a fear-ray as a war invention, is persuaded by one of the racketeers to turn the ray to crime, and to kill off his other three partners.