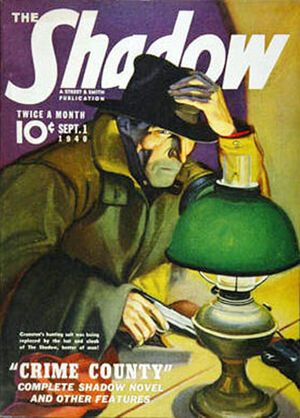 You'll need that heater, Sparrow. So lug it along, but don't try to use it. Call me Clink, but don't forget who I am. Remember, if I start shooting -- you'll get the first dose!

The Darport police force had become composed of mobsters! They were responsible for the mysterious crime wave that was increasing along the New Jersey port! -- And The Shadow knew it!

Retrieved from "https://thelivingshadow.fandom.com/wiki/Shadow_Magazine_Vol_1_205?oldid=10254"
Community content is available under CC-BY-SA unless otherwise noted.