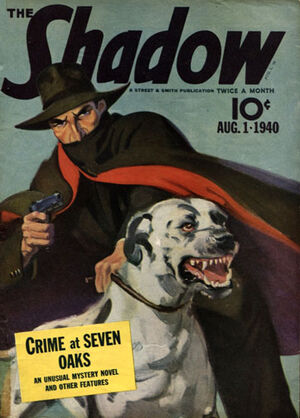 Appearing in "Crime at Seven Oaks"

Synopsis for "Crime at Seven Oaks"

Peaceful was the countryside surrounding "Seven Oaks;" nothing marred its tranquility -- until the banshee wailed! Then crime struck with a vengeance! But it brought The Shadow to this sylvan scene, to combat the menace that threatened the Melridges!

Retrieved from "https://thelivingshadow.fandom.com/wiki/Shadow_Magazine_Vol_1_203?oldid=15192"
Community content is available under CC-BY-SA unless otherwise noted.