The Shadow Wiki
Register
Don't have an account?
Sign In
Advertisement
in: Publications, 1940, July, Golden-Age,
and 17 more 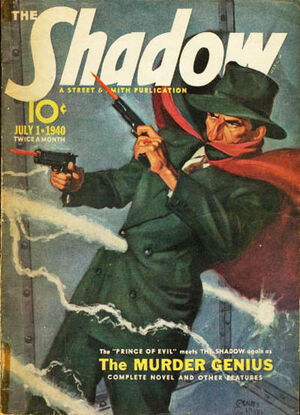 Perhaps you'll be more concerned when I tell you that only a complete confession of your real identity will save the life of Rutledge Mann. Keep silent - and you'll have the pleasure of seeing him roasted alive!

The warped brain of the Prince of Evil, matches wits with The Shadow, master over crime - as The Shadow attempts to rescue one of his secret agents from the murder genius!