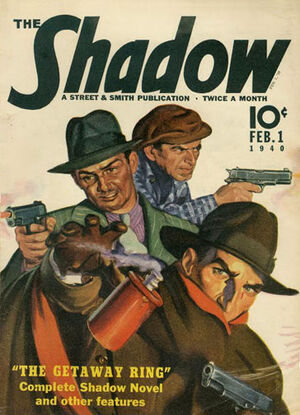 Appearing in "The Getaway Ring"

Synopsis for "The Getaway Ring"

Here was something new in crime -- something criminals had always dreamed about: a perfect means of a getaway from the scene of a crime! Was it possible for The Shadow to follow a trail marked only for the eyes of crooks?

Retrieved from "https://thelivingshadow.fandom.com/wiki/Shadow_Magazine_Vol_1_191?oldid=11263"
Community content is available under CC-BY-SA unless otherwise noted.