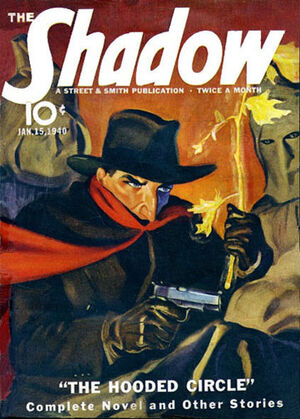 When Hayde painted those hell pictures, he got a lot of tough guys to pose for him. They got a laugh out of it, from what Hayde tells me, but, later, they must have decided that it wasn't so funny. They kind of realized they'd been mugged. Get it? Too many people are going to see those paintings and remember the faces. Important people - the kind that smart crooks might start out to swindle. Suppose some yegg gets spotted cracking a rich guy's safe. Maybe the rich guy would recognize him as the third devil from the left in the painting of the Fourth Hell. The mob that blew in on Hayde wore hoods. That was so he wouldn't know who they were. The idea struck me when I was talking with Hayde, after the robbery. He sort of remembered voices, but wasn't sure whose they were.

Appearing in "The Hooded Circle"

Synopsis for "The Hooded Circle"

Retrieved from "https://thelivingshadow.fandom.com/wiki/Shadow_Magazine_Vol_1_190?oldid=11226"
Community content is available under CC-BY-SA unless otherwise noted.