The Shadow Wiki
Register
Don't have an account?
Sign In
Advertisement
in: Publications, 1932, December, Golden-Age,
and 17 more 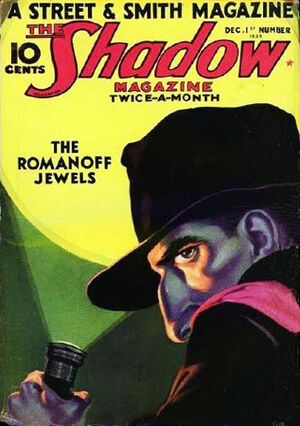 You have sought the Romanoff gems. I have brought one here to show you. Gaze upon the stone that gleams from my finger. That priceless girasol was once owned by the Czars of Russia. It, alone, of all the baubles in this room, is genuine! This girasol was a gift, which I accepted as a memento of friendship from the man who owned it.

Appearing in "The Romanoff Jewels"

Synopsis for "The Romanoff Jewels"

The lofty towers of the Kremlin loomed like spectral spires against a darkened sky. Senov – master spider in a web of espionage – was about to ensnare America in the most nefarious deal of all time: behind the guise of a trade detente, he and his treacherous American trusties will swap the Romanoff jewels for help in restoring the ancient Russian monarchy! Only a certain black-clad form, swept like the shroud of night itself across the oceans and mountains of a desperate world, could hope to challenge such global enemies... and from the mysteries of New York's Cobalt Club to the thrills of a breathtaking submarine voyage the Shadow carves a dark and hidden path for the forces of justice: beware The Shadow as you beware the darkest unknown!

This story provides an origin to The Shadow's Girasol ring. In the final chapters The Shadow confronts the three main villains of the story in a private room with the Romanoff Jewels. He informs them that the jewels were fake in order to maintain the appearance of wealth. He tells them that the gem on his ring is the only true piece of the treasure in the vicinity. The emperor of Russia gave Kent Allard the ring as a gift for his services in World War One. Although the details remain shrouded in mystery this is how The Shadow obtained his prized gem. Or is it... Later it is revealed that the gem came from the eye of an idol in South America. Later in life Walter Gibson was quested about the mistake in continuity. Not one to be outsmarted. Gibson explained that there are two origins to the gems because there were two eyes to the Idol. Meaning the Shadow has both.