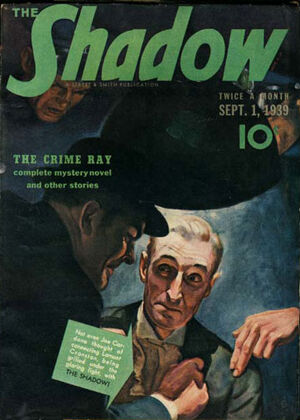 I am The Shadow! Save your sham for your friends! Clever of you, Delcott, to pose as victim, and hide the fact that you ruled crime! I tricked your crew tonight when I crawled into the truck and lay among the injured! Yes, I am The Shadow! No longer do I need to crawl from danger. You obligingly gave me time to recuperate. I am going out of here - alone - through the mob of crooks who serve you!

Appearing in "The Crime Ray"

Synopsis for "The Crime Ray"

Retrieved from "https://thelivingshadow.fandom.com/wiki/Shadow_Magazine_Vol_1_181?oldid=11333"
Community content is available under CC-BY-SA unless otherwise noted.